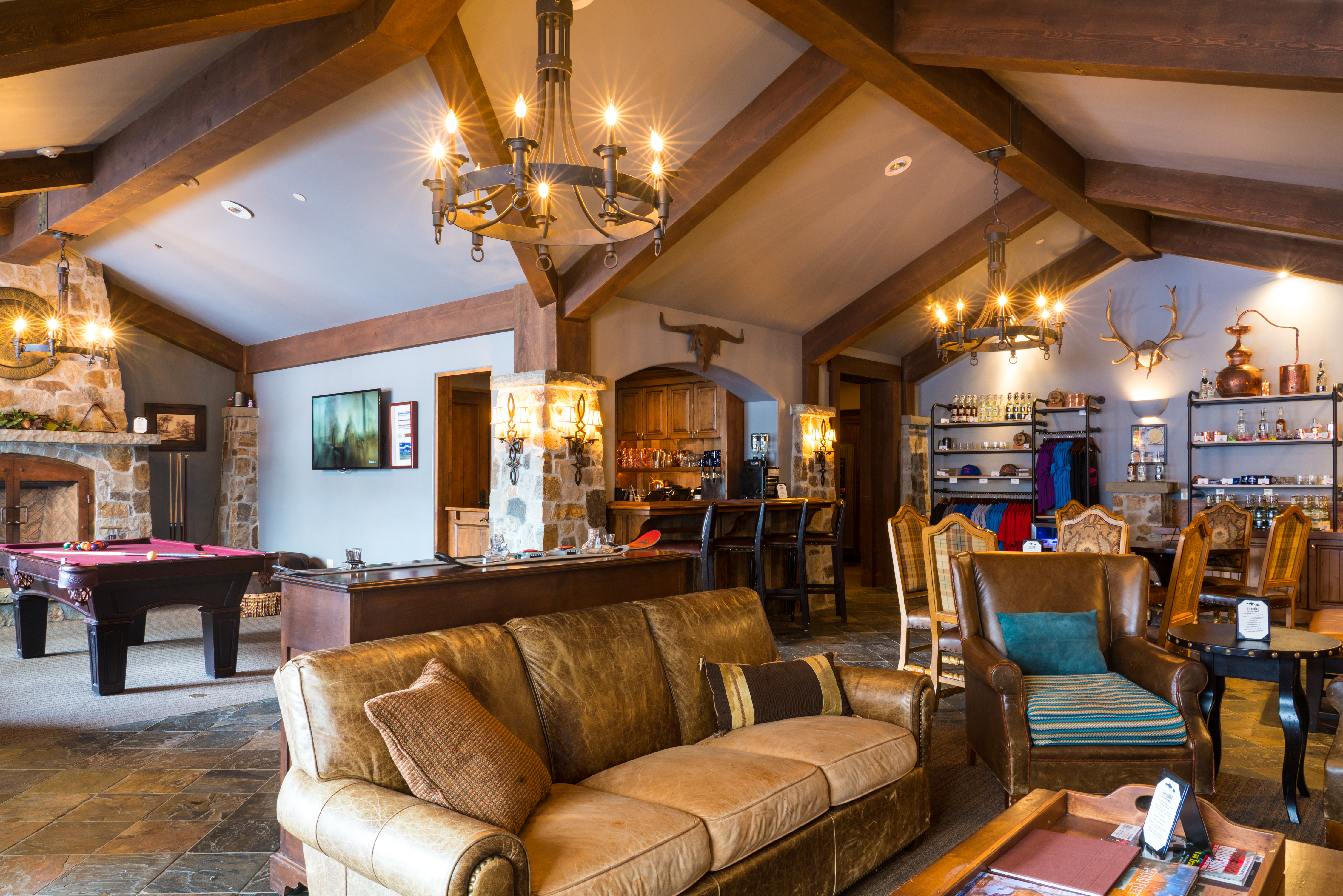 Step into the new Telluride Distillery Tasting room in Mountain Village and you can already feel the vibe in the Core changing. Add a dash of Telluride history and a pinch of creativity for expansion and voila – a thriving second location for the Telluride Distilling Company is made.

Handcrafting vodka since 2015, Abbott and Joanna Smith have pursued their labor of love first opening the Telluride Distilling Company in Lawson Hill at the Society Turn Business Center. Now, with the opening of a second tasting room in the Franz Klammer Lodge in the Mountain Village Core, fans of the distillery won’t have to travel far to enjoy local liquors. 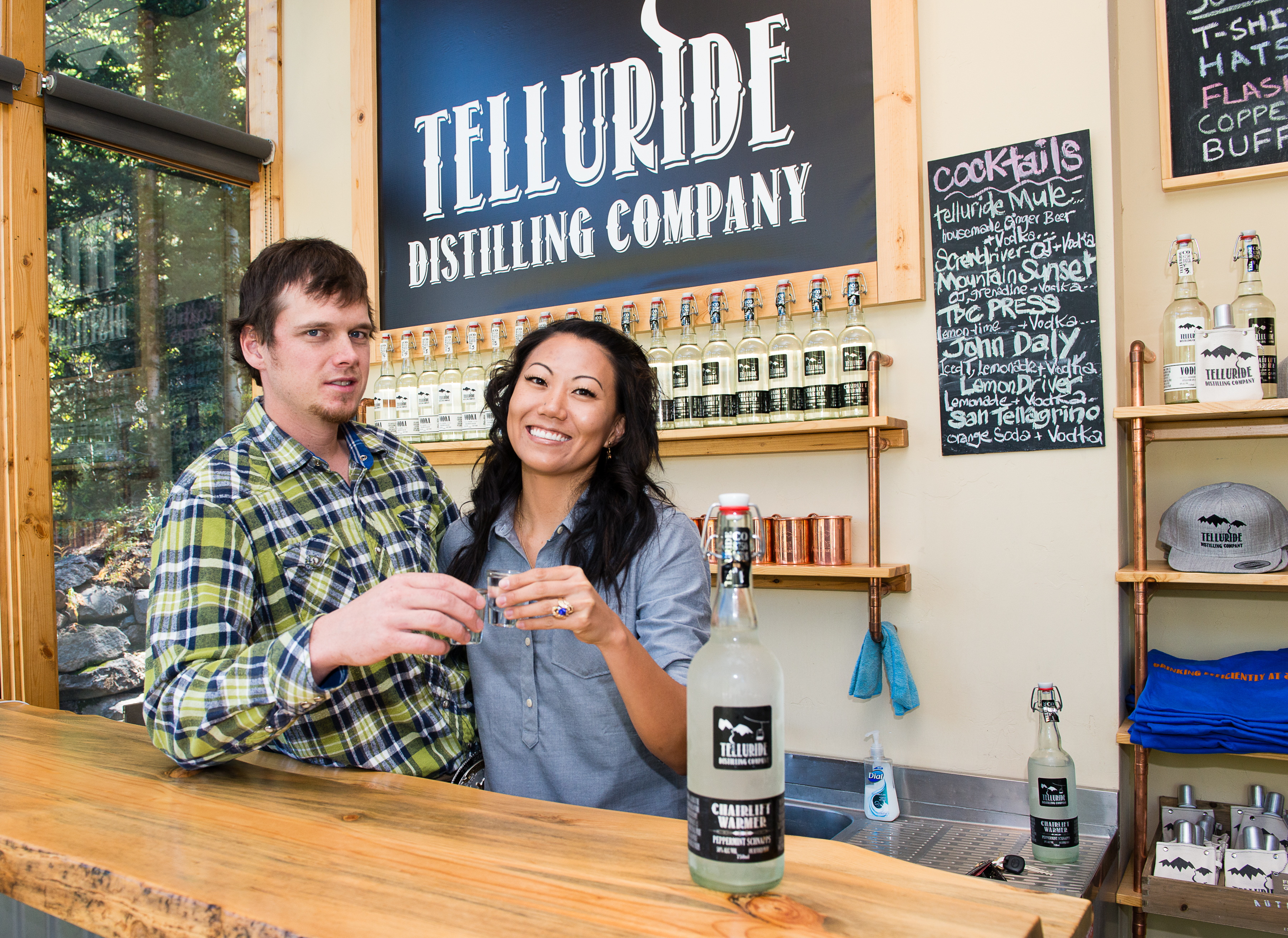 With vodka, whiskey and schnapps offerings, Telluride Distilling Company rolled out their vodka first in 2015. Their vodka is a throwback to an old Telluride miner’s recipe. “They used to import eight tons of sugar a week for miners back in the day, and we wanted to give nod to a true Telluride recipe”, Abbott said. With its creamy and velvety texture, it has become a local favorite. “Good vodka is meant to be flavorless, odorless and textureless” according to Abbott. Their schnapps was unveiled in May of 2016 and was an ‘afterthought’ according to the couple.

“We love peppermint schnapps and decided, why don’t we make one?” Joanna said. Their authentic peppermint flavor combined with half the amount of sugar makes it a popular choice among locals and visitors alike. “It has the least amount of sugar to still be called a schnapps and no additive chemicals. Our German and Swiss clientele love it. It’s not your typical schnapps from college”. And as one of the only peppermint schnapps to win a gold medal at the International San Francisco Spirits Competition, it’s the natural choice that could easily go national, according to the couple.

The mountain mash whiskey is aged for at least two years in oak barrels. It’s a unique mash made of a 50/50 mix of the best parts of malted barley and rye. “We stay away from corn-based ingredients, as well as GMOs” Joanna added. 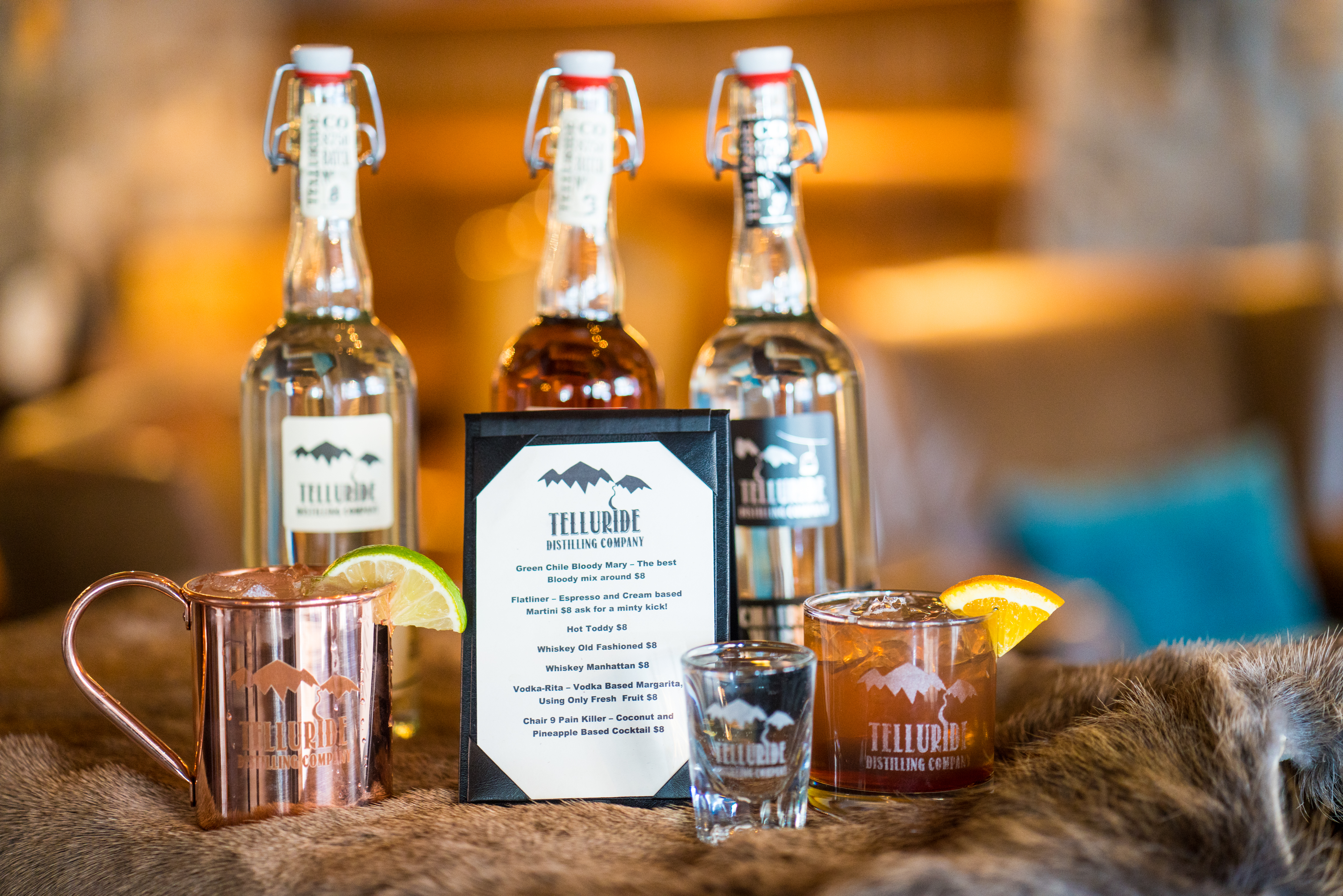 When asked about the couple’s thriving success, the down-to-earth co-owner Joanna, who studied chemistry and microbiology at the University of Colorado, simply stated “We wanted to grow organically. We each knew at a young age that we wanted to own a business in the future, and after realizing the market for distilling was on the rise, we wanted to build something that allowed us to stay in Telluride while serving the community we love so much”.

Abbott, with an engineering and business background, combined with his distilling knowledge is “always reverse engineering everything” and found space in the Telluride market.

Their combined brilliance led to the creation of one of the only continuous fractioning columns in the state – that Abbott built with his bare hands. Sourcing parts and perfecting their distilling based on temperature and chemical compounds, the duo was able to dually shine.  “Our distillery is controlled by computer rather than someone’s senses”, Abbott said, “it’s been the only one in the state before last year.”  Their technical expertise is firmly on display as there are only two manufacturers in the US that builds them. He also constructed their soda system from scratch for their ginger beer, and the couple serves their own recipes and mixes using fresh fruit and their own unique frozen drink machine.

When asked how they manage their organic growth intelligently, Joanna expressed that they have been approached by several other states to distribute, including Texas, Arizona, Wisconsin, New York and California. She says they are very careful about their research and sourcing and want to nurture their small Colorado brand in the right way.  She adds that they are careful and not frivolous, and meticulous about everything they buy.

“We knew how to distill, we just had to learn the business side of operating a distillery,” she said.

And excelled to the top of the class they did. By focusing on three quality products, the husband wife team was able to have a high-quality product every time, allowing ease to market and lower costs aiding them in being competitive in such a narrow field.

“We appreciate that the locals are so supportive”, Abbott said. Bartenders will pour it and it moves, so business owners know it will sell.  We maintain $5 mules for locals, and our $4 schnapps shots are a favorite.

In addition to its new location across from the new Sunshine Pharmacy location, the tasting room also offers free popcorn, pool and darts.  The newest addition will be “Putt-Ski”, a golf/skeeball/beer pong game. Their commitment to community is also highlighted by their recent ski patrol fundraiser, which included raffles, donating a portion of the drink costs to the Hawkeye Foundation and supporting the Logan Fuller fund.

Abbott met Joanna at the Bluegrass Festival in 2011 and realized they were on the same wavelength over dinner at now defunct Flavor.  She was working nonprofit, he a bartender at Mountain Lodge. After discovering commonality in where they wanted to be in the world and how they wanted to impact it, their backgrounds and prowess bore a partnership.

“I was living in Vail at the time working for a nonprofit foundation and a friend gave me some Bluegrass tickets.  I reconnected with Abbott through ski friends and we realized our shared passion.” Joanna said.

In the early days, you would often find the Smiths tending bar themselves to support the tasting room and their distributorship. “We worked hard to ensure we could collaborate and grow the right way” Joanna said. “We were very careful to grow organically and didn’t want to hound businesses to carry our brand. It’s not about the hype.”

But the hype has come, hand in hand with the opening of the June 15th common consumption area (CCA). “It really helps with capacity and we’re excited to expand with additional umbrella tables out front,” she said.

The move was years in the making and comes just in time for the expansion of the CCA in the Village Center. Championed by the Mountain Village Town Council and President Anton Benitez, Laila Benitez and Dan Caton, the new area will be in effect every day and will include Heritage Plaza and walkways and breezeways connecting the town center to the Sunset Plaza area.

Anton Benitez also serves on the Mountain Village Promotional Association (MVPA) which was formed in 2014 to diligently address the numerous requirements like security and signage that come with managing a CCA.

Support for the second location wasn’t hard to find. Telluride Real Estate Corp had the space and Jon Dwight, Alex Martin and Marcin Ostromecki aided the couple in their search for a second location to support their wholesale distributorship.  “We wanted a tasting room and it blossomed into a full bar. We never thought we’d have two locations: production and a separate tasting room in Mountain Village” Joanna said.

The Smiths are truly part of the Telluride tribe. Hailing from Wisconsin and Colorado, the couple enjoys the outdoors and hunting. Joanna’s grandparents met shooting and her great grandmother was born in Telluride – part of the Biddle clan. Her great great grandpa was an admin for the area’s school system and was also in the marching band for one of Telluride’s first July 4th parades. You can even check out a large pair of antlers mounted on the wall from an Elk Joanna’s grandmother shot with a muzzle loader back in the 50s.

With relatives here and their family steeped in history, the Smiths have deep respect for each other, locals and their employees. As if being one of the top distilleries in Colorado wasn’t enough, they cite one of their greatest achievements as having their family members from Wisconsin, Chicago and Key West finally visit Telluride when the Mountain Village tasting room opened.

Joanna still maintains her nonprofit work, and although their business is their baby and shared passion, they are also proud parents to furry babies “Larry Byrd” and a Wiemaraner “Zee”. They are extremely grateful to the town and give awesome kudos to the Town Council for being so supportive. When asked what it’s like to build up from treading water while nurturing their small Colorado brand, Abbott smiled and said, “It’s like being on a supercharged jet ski versus swimming!”

The Smiths encourage you to come by and try their hand made spirits, where they use only the finest ingredients distilled in a unique, high-altitude environment. The one of a kind experience and smoothness of each sip will keep you coming back for more. “Anything to bring people to the Mountain Village is a win for us”, the couple stated. “TMVOA did so much for us, we are happy to support them however we can.”