Ski season isn’t over yet—especially not at this unspoiled Colorado resort, now just a direct flight away from Boston.

From day trips to weekend getaways, our biweekly Traveler newsletter shows you the best of New England and beyond. 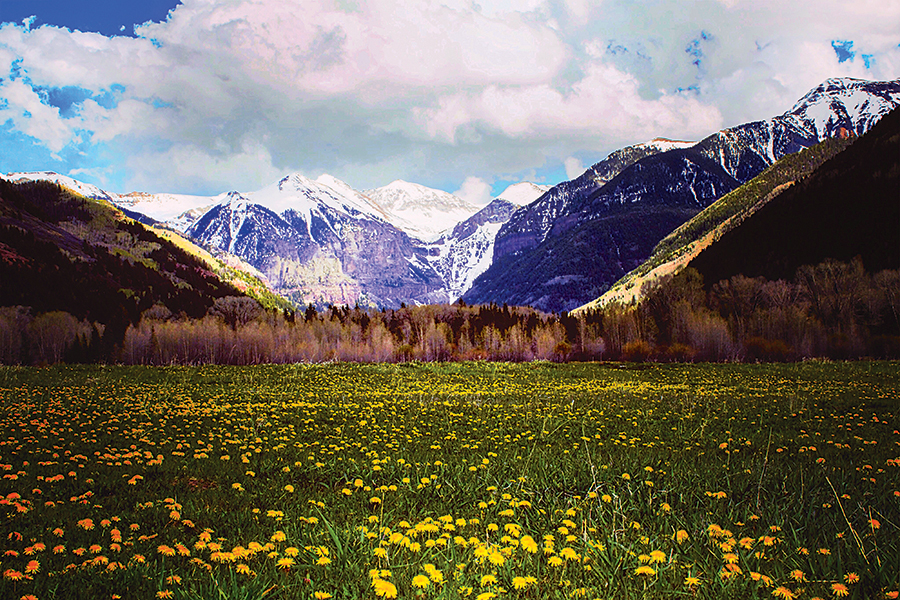 In Telluride, the sky’s the limit when it comes to outdoor pursuits. / Photo via Amy Tice/Eyeem/Getty Images

Lots of places like to claim the title of “Colorado’s last great undiscovered ski town,” but few deserve it as much as Telluride, tucked into a box canyon that’s closer to the Utah border than to Denver. Small, remote, and uncrowded, the resort comprises a 19th-century gold-mining town and the newer Mountain Village, connected by a free, 13-minute gondola ride that’s an inextricable part of the whole experience—not to mention absurdly scenic.

When there’s snow on the ground, as there usually is until April, skiing in Telluride is only the tip of the iceberg. Ice-skating, snow-shoeing, fat-tire biking, and snowmobiling on the valley floor—a designated conservation area—are all worthy winter pursuits. Adrenaline junkies will want to try high-altitude heli-skiing with Telluride Helitrax or ice-climbing at Mystic Falls, while the less adventurous will be happy just marveling at Bridal Veil Falls, the highest free-falling cataract in Colorado. In warmer weather, there are endless opportunities for biking, hiking, and fishing, and whether you want to view wildflowers or wildlife, the Uncompahgre National Forest won’t disappoint.

Looking for some après fun? Immerse yourself in the culture, food, and old-school charm of downtown Telluride, a designated National Historic Landmark District since 1964. For such a small area (only eight blocks wide by 12 blocks long), it boasts a surprisingly diverse array of restaurants, from the New Sheridan Chop House, a fine-dining stalwart housed in a historic 1895 hotel, to the casual but superb Taco del Gnar and Brown Dog Pizza. Telluride is also beloved by culture vultures, with a bona fide Arts District boasting an impressive array of galleries and venues, not to mention live music. Later in the year, visitors and locals alike flock to the internationally renowned Telluride Film Festival. Held annually on Labor Day weekend, the Oscars bell­wether has earned glowing praise from the likes of Roger Ebert, the New York Times, and Salman Rushdie.

In short, Telluride’s a small town that punches way above its weight, without the posers, paparazzi, and poor air quality of other high-end Colorado resorts. There is, indeed, gold in them thar hills, and you’ll find it here.

Situated in the secluded south-west corner of Colorado, Telluride is about as far as you can get from the choked I-70 corridor that services better-known ski resorts like Vail and Aspen. In fact, the town has no traffic lights, and the nearest stop sign is 45 miles away. It’s a six-hour drive from Denver, but thanks to JetBlue, Bostonians can now fly nonstop from Logan to Montrose, Colorado, on the airline’s weekly Saturday service. From Montrose, it’s like driving through a snow globe for an hour and a half to reach this still-pristine ski town.

Part of the Auberge Resorts Collection, the five-star Madeline Hotel and Residences in Mountain Village just emerged from a thorough facelift, with luxuriously refurbished guest rooms; reinvented public spaces, including the Timber Room resto-bar; and new amenities, such as the Recovery Ski Lounge, created by Olympian (and Telluride native) Gus Kenworthy.