Winter Olympics: What you need to know ahead of Beijing 2022

(CNN)There are just weeks until the start of the Winter Olympics in Beijing, the second Games to be held in the middle of the pandemic after last year's Summer Olympics in Tokyo.

Beijing will become the first city to host both the Summer and Winter Games following its Olympic debut in 2008, and last month, organizers said preparation was "very much on track" for the Games to be delivered as planned.

But it hasn't been straightforward. As with last year's Summer Olympics, a raft of Covid-19 countermeasures have been put in place ahead of the Games, which will again take place in a Covid-safe "bubble" system.

Beijing will then also host the Paralympic Games, which run from March 4-13.

How will the Games be staged amid the pandemic?

Organizers intend to hold Beijing 2022 in a closed loop system which will only be accessible for Games participants -- a plan that has remained in place amid the rapid spread of the Omicron variant.

As outlined in a Games playbook published in December, the closed loop system will encompass venues, official hotels and the event's own transport service. 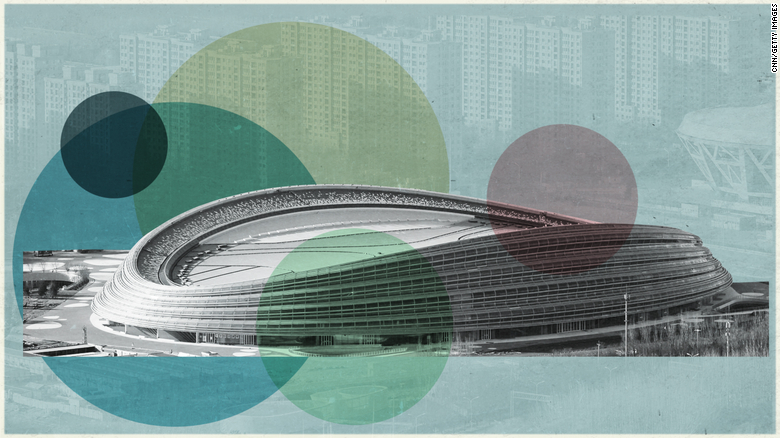 Fully vaccinated participants will be able to enter the closed loop without quarantining, while those who aren't vaccinated will need to quarantine for 21 days upon arrival in Beijing.

Medical exemptions, considered on a case-by-case basis, may be granted to those who are unvaccinated. Some countries, such as the US and Canada, have mandated that all team members be vaccinated.

During the Games, participants will be subject to daily health monitoring and testing and will have no contact with the general public.

"The loop is very safe. It's a place that I would say is very difficult to compare with any other place in the world at this point in time, because we have here a fully vaccinated, often boosted population that is being tested daily with a PCR and living in a closed loop," Pierre Ducrey, Olympic Games operations director for the International Olympic Committee (IOC), told reporters on January 12.

Ducrey added: "It is called a closed loop for that very reason. It means there will be no contact between people outside the loop and inside the loop. It has been built to protect the population inside, and also the population outside."

Last month, Huang Chun, a member of the local organizing committee, accepted that the Games could bring "Covid-19 cases or small clusters of infections" into China given that "a large number of overseas personnel will gather, causing a very high risk of transmission."

Over the course of the pandemic, the country has implemented a zero-Covid policy of mass testing, extensive quarantines and snap lockdowns to eradicate any emergence of the virus.

Tickets for the Games will not be sold to the general public in response to the pandemic, but instead distributed by authorities, the Beijing Winter Olympics Organizing Committee announced on January 17.

"In terms of the grim and complex situation of epidemic prevention and control [and] in order to protect the health and safety of Olympic personnel and spectators, we have decided to change the original plan of public ticket sales," the committee said.

Audiences will still be required to "strictly comply with Covid-19 prevention and control requirements before, during and after watching the Games," the committee continued.

The announcement comes after Beijing reported its first case of the highly transmissible Omicron variant on January 15.

Where are the venues?

While the Chinese capital of Beijing is the official host city of the Games, venues are spread across three areas: Beijing, Yanqing -- a mountainous district 75 kilometers (about 46.6 miles) northwest of Beijing -- and Zhangjiakou, a skiing and snowboarding destination a further 100 kilometers (about 62.1 miles) beyond Yanqing.

Of the 13 venues hosting events, one -- the National Speed Skating Oval -- has been newly built in Beijing, while existing venues have also been renovated for the Games.

The Beijing National Stadium, commonly referred to as The Bird's Nest, will host the opening and closing ceremonies.

Each of the three zones has its own Olympic Village, while all three are connected by a newly built, intercity railway. 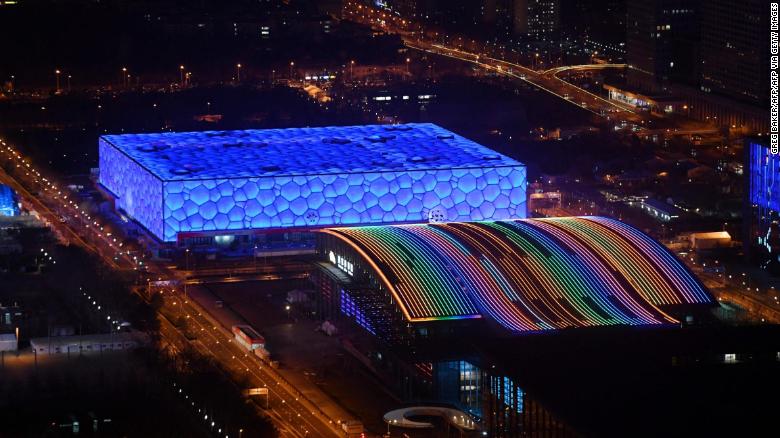 The National Aquatics Center (left) and the National Indoor Stadium (right) will both host events during the Winter Olympics.

Who are the Olympic and Paralympic mascots?

The mascot for the Winter Olympics is Bing Dwen Dwen -- a panda dressed in a full-body "shell" made out of ice -- and Shuey Rhon Rhon for the Paralympics, a Chinese lantern child.

Bing Dwen Dwen (Bing means 'ice' in Mandarin Chinese, while Dwen Dwen means 'child') was chosen from over 5,800 submissions from around the world. 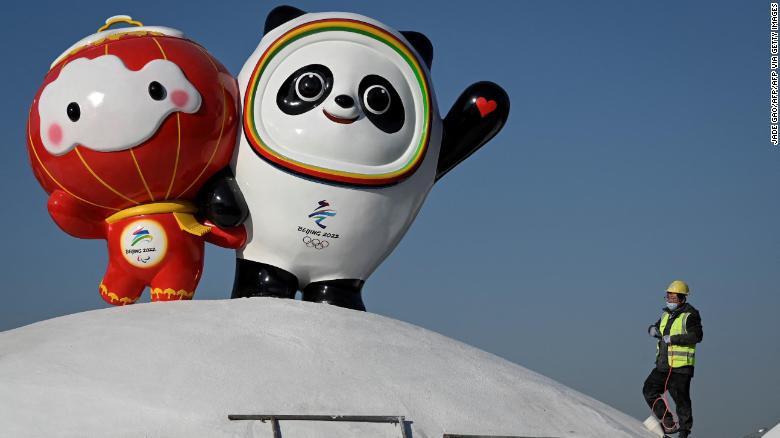 According to the Paralympic website, Shuey is the same pronunciation as the Chinese character for 'snow,' the first Rhon means 'to include, to tolerate,' and the second means 'to melt, fuse and warm.'

What is the political controversy surrounding Beijing 2022?

The US, Canada, Australia and the UK are among the countries to have announced diplomatic boycotts of the Winter Olympics.

That means that athletes from those countries will still be able to compete in Beijing, but no government officials will be in attendance.

In December, White House press secretary Jen Psaki said that the boycott would serve as a "clear message" against China's "ongoing genocide and crimes against humanity in Xinjiang."

According to the US State Department, up to two million Uyghurs and other Muslim minorities are believed to have passed through detention centers in Xinjiang, which the Chinese government insists are "vocational training centers" aimed at poverty alleviation and combating religious extremism.

Following the announcement of the US diplomatic boycott, Chinese Foreign Ministry spokesperson Zhao Lijian said that the US should "stop politicizing sports and hyping up the so-called 'diplomatic boycott' so as not to affect China-US dialogue and cooperation in important areas."

As for athletes, the controversies around the Games can present a moral dilemma. Last year, US skiing star Mikaela Shiffrin, a three-time Olympic medalist, told CNN that "you certainly don't want to be put in the position of having to choose between human rights, morality versus being able to do your job."

Who are the athletes to watch?

Shiffrin, who has recently returned to alpine skiing's World Cup circuit after contracting Covid-19, is set to be one of the most high-profile athletes in Beijing. At the last Winter Olympics in PyeongChang, South Korea, she won gold in the giant slalom and silver in the alpine combined.

Other familiar faces on the US team will include snowboarder Shaun White, who anticipates that this will be his last Olympics, 2018 halfpipe gold medalist Chloe Kim -- the youngest woman to win an Olympic gold in snowboarding -- and popular figure skater Nathan Chen.

Two-time figure skating gold medalist Yuzuru Hanyu from Japan will go up against Chen in his bid to win a third consecutive gold medal in the men's singles event.

Mikael Kingsbury, the most decorated mogul skier of all time, will also be heading to Beijing to try and defend his title from 2018.

China, not as dominant at the Winter Olympics compared to the Summer Games, won nine medals in 2018. 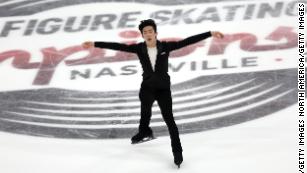 According to sports data company Gracenote, Norway -- whose athletes often excel in cross country skiing and biathlon -- is predicted to top the medal table with 45 medals ahead of the Russian Olympic Committee with 32, Germany with 25, and the USA and Canada with 22.

Why is North Korea going to miss the Games?

One country to have announced that it will not be sending athletes to Beijing is North Korea.

According to state-run news agency KCNA, a letter sent from North Korea's Olympic Committee and Ministry of Physical Culture and Sports to its Chinese counterpart cited "hostile forces" and the worldwide pandemic as the reasons for its non-participation, accusing the United States and its allies of trying to prevent the successful opening of the Olympics.

The US and its allies are getting "evermore undisguised in their moves against China aimed at preventing the successful opening of the Olympics," the letter, which did not explicitly cite diplomatic boycotts, said.

Last year, the IOC suspended the North Korean Olympic Committee until the end of 2022 as part of its punishment for its "unilateral decision" to drop out of the Tokyo Olympics, effectively barring the country from formally competing in Beijing.

The IOC said at the time that if any North Korean athletes were to qualify for the Winter Olympics through processes already taking place, it "will take an appropriate decision in due course for the athlete(s) concerned."

North Korean athletes did compete at the 2018 Games, with athletes from the North and South marching together under one flag at the Opening Ceremony. A North Korean delegation was also sent to South Korea during the Games.